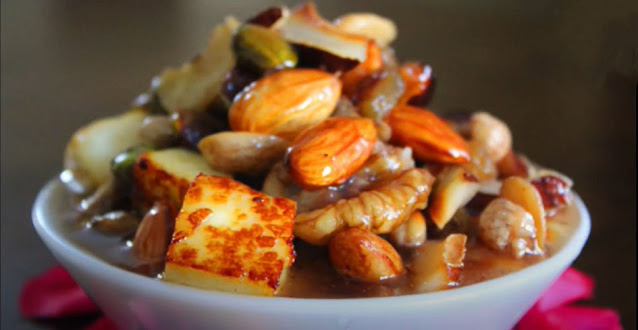 Restaurant-style bhindi-do-payaza, fingers will be licked

Pyaz Kachori Recipe: Now you will fall in love with onion kachori, except for potato and lentil kachori.

Kashmiri Shufta Recipe: you forget the taste of sweet and rasgulla after eating shufta

Kashmiri Shufta Recipe:
To make Kashmiri Shufta, soak all dry fruits except coconut balls and soak them in water for at least an hour.

– Put the pan on the gas. Add ghee to it. When the ghee gets hot, add pieces of paneer and fry it until it turns light golden brown. Now take it out on a separate plate. Fry the chopped coconut ball in the leftover ghee and take it on a plate.

Now take the dried fruits out of the water and dry them lightly on a cloth. Then fry it by adding ghee.

Now add sugar and boil it. Add water and all spices and mix well. Boil it until the sugar is completely dissolved. Add the coconut ball and paneer and cook for 4 to 5 minutes. The Kashmiri Shufta is ready.

The use of coconut oil is very beneficial in the winter...

Brain Aneurysms: Don’t ignore a headache if you are very strong,...

Are you ignoring these physical symptoms? Do not ignore, it can...